Under the theme of “sexual wellness for women”, we invite various “sex experts” to aim for a place where you can learn sex more correctly and in a fun way. Youtube channel “bda Organic | Sexual Wellness School”.

Of all three times that I asked about “important mind, skill, body in sex”, I will deliver the pattern of vol.1 who talked about in digest while including the video non-recorded part.

If you know it realistically, you will not be afraid.

Miura: Do you think that there are many women who know your body after seeing Mr. Forest?

Moribayashi: I think there are very few. Even if you think you have the knowledge, the information may be biased. For example, there seems to be an increasing number of orthopedic surgeries that remove the labia minora, a fold-like part around the vaginal opening, but it seems to be functionally large or asymmetrical, but there is no problem. ..

However, like the pseudophimosis of men, it is thought to have to be cut off because of its relative aesthetic point of view. Similar to the slimming myth, it is a business duck that sells products and services with anxiety from an aesthetic perspective without a correct answer. According to one theory, the shape of the labia is the prototype of the heart, and if so, the larger one becomes a better heart.

Moribayashi: Many women have never seen their genitals. I’ve never touched it, and I don’t know how to wash it. From a man’s point of view, even if you say something that you don’t really understand and say “make yourself comfortable,” it’s like giving an iPhone to a person 100 years ago and saying “use it.” There is no way.

Miura: When you started acting as an actor, didn’t you know much about female genitals?

Moribayashi: Yes. I only had a brother, so I didn’t have a period close to me. When it comes to shooting AV movies, there are actresses whose timing of menstruation collides with the filming, and I ask them how difficult it is and what kind of care they need. It is also the job of the actor to put an absorbent material called “sponge” in the female genitals so that menstrual blood does not come out, and if you get to know what your menstruation is like, you will not feel like aversion.

Also, men should get angry. I was motivated to find out about menstruation, and at one point I had a conversation with a friend and said, “There are times when women are in a bad mood for some reason, but at that time, if you think of them as “menstruation,” then She was angry when she said, “I’m not frustrated.” “Don’t you think you’re frustrated because of yourself!?” Ah, you can’t just blame your period.

Genital relationship with affection and excitement

Moribayashi: Actually, men don’t really remember their partner’s female genitals. I can hardly remember the shape, color, and smell. It’s more like that. How did you feel when you were connected, what kind of words you exchanged, and how pleased you were…
Therefore, I don’t think there are many men who are excited or withered only by looking at their genitals. If you’re excited from that perspective, you’re fetishally excited about things, not people.

Miura: In the featured sex for women, there are many threatening articles, such as “If your hair is dark, men will wither.”

Moribayashi: That’s an economic trap (laughs). Certainly, there are some people who say that out loud. Moreover, the subject is large. Like “I’m a man…”. I like hair, “No, no, it’s because of your personal circumstances!”

Miura: Are there any misconceptions about women’s bodies?

Moribayashi: I feel that I have oversimplified my male genitalia, both for good and for bad. Do you think that the male genitalia has grown = want to do? On the other hand, if you feel like you’re squeezed or you’re not feeling well in the first place, you’ll think, “You don’t love me, right?” Erection, affection, and excitement tend to be set. It’s not in proportion to each other, but there are times when I love you even when I don’t get up, and sometimes when I don’t get up because I like it too much.

Men don’t even know why they don’t get up or why they are ticking. Basically, I’m not connected with my intention. The person who can connect with that will become an AV actor. Let it erect with intention, go with intention. I myself had this kind of talent, but I was very talented. The first time I was told to “launch,” it took 5 seconds (laughs).

Miura: It is tough for women to judge their affection and excitement without getting wet.

Moribayashi: Wetness also depends on your age and physical condition. There are almost 100% lotions at AV shooting sites. I think lotions are seat belts if a condom is a driver’s license for sex. The car will work without a license or without a seat belt. But it’s dangerous. I will be caught.

Miura: I don’t want to ride…

Moribayashi: Two or thirty years ago, there were more people without a license and driving without seat belts than they do today. I didn’t have the correct knowledge. We, who have the correct knowledge, feel fear there.
My sense is that sex without condoms is a suicide, and without lotions you’re too dreamy. It is natural to use condoms and lotions. If this spreads as correct knowledge, it will not add extra meaning to it. I don’t use lotion because I don’t feel wet because I’m not wet, and I don’t feel that I need lotion to enjoy the act safely and safely.

Miura: Self-pleasure is one of the ways to know yourself. It is the act of making yourself feel good. Mr. Hayashi, do you think women should also take self pleasure?

Moribayashi: Of course! When you enjoy sexuality, you need to know for yourself that it feels good and that it hurts. That is to “make your own body”. Otherwise, you can’t say “Stop it” or “I want you to do this” when you need it.

Basically, men also think that they are good. Therefore, I asked the woman, “It feels good.” But women can’t say it hurts. It’s the same as saying, “Isn’t it delicious” when I was asked “how?” when the curry and rice was cooked overnight. I can’t say it because I know the favor of the other person.

“Getting pleasure” and “searching for comfort” are human instincts. Pleasure and comfort vary from person to person, but everyone wants it together. And for most people, it’s nice to connect with a good partner. There are various ways to connect, whether they are real or online, and their fulfillment will be a joy to live.

Let’s value the pleasantness and discomfort in ourselves 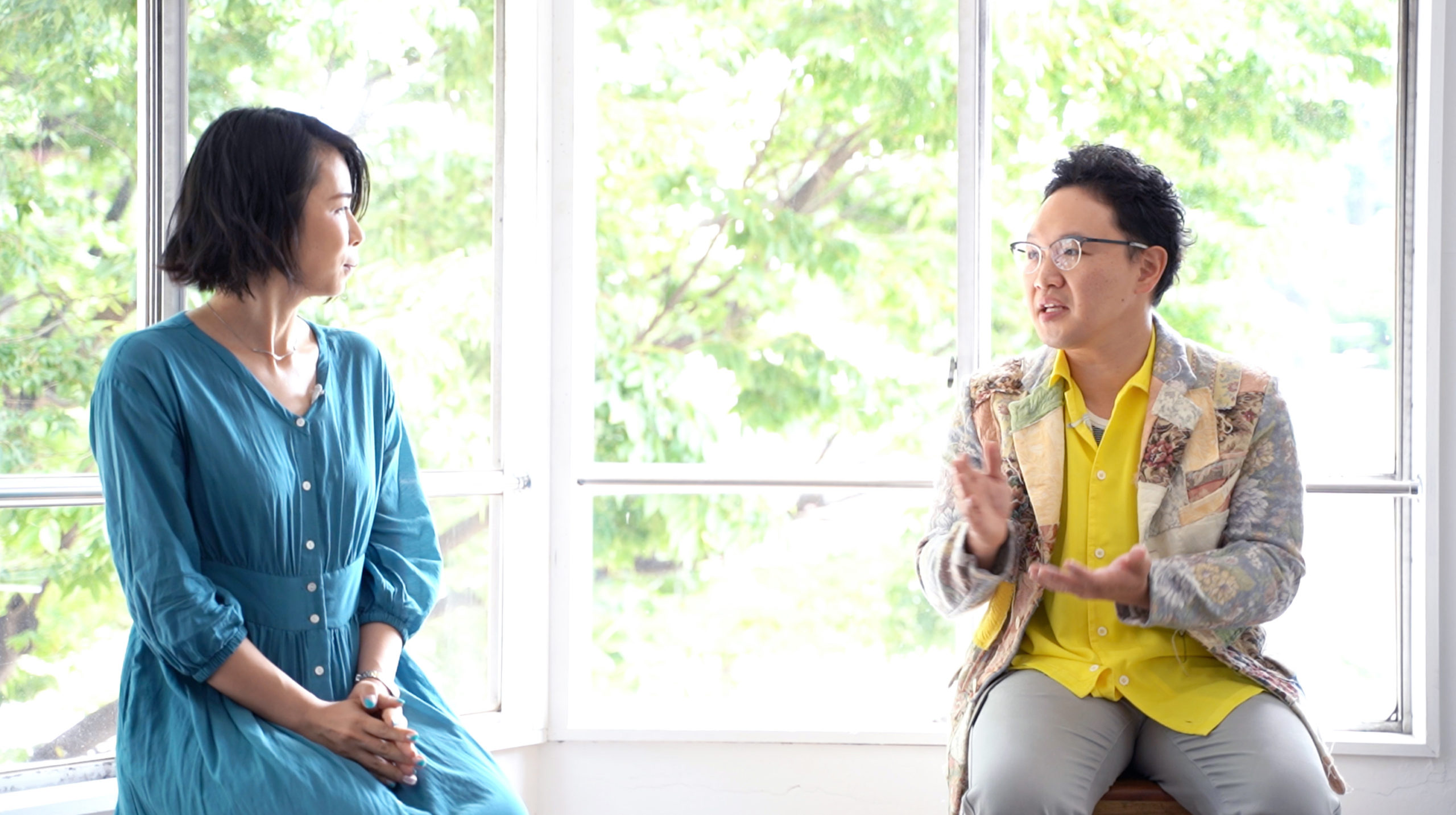 Miura: Kai does connect people with each other.

Moribayashi: Human beings have a fundamental sense of loneliness, which creates a desire to connect with someone. I think sex and sexuality are very effective in overcoming that feeling of loneliness. In order to gain the pleasure of connection, it is necessary to activate the pleasure receptor in yourself as a preparatory step. It’s not a difficult thing to do, it just reactivates the receptors that were used to distinguish between comfort and discomfort as a baby.

As we grow older, we will prioritize relative judgments such as correct and incorrect answers, gains and losses, rather than comfort and discomfort. It is certainly necessary to adapt to society, but when dealing with sexuality, I want you to value not only meaning and value, but pleasure and discomfort in yourself. To do this, turn your consciousness inward so that you can hear the voice of the heart deep inside you. That’s why I take self pleasure. In a beautiful way, it’s the act of loving yourself.

Miura: What do you think is the nature of pleasure in sex?

Moribayashi: I think it’s about connecting with other people than yourself. Insertion is not necessary there. The actions are skin-to-skin contact, staring at each other, and hugging each other. What is different from insertion is that there is a sense of unity in which the subject and the object, and the active and passive positions are constantly interchanged, and that is the essence of sexual pleasure.

I’m not denying the pursuit of orgasm. However, if you set it as a goal or goal, you will not be able to capture it like a game or end up in a competition where there are wins and losses. Remember that the essence of sexual pleasure is “connection.”

People do not know what to think of things they do not know, have never seen or touched. Not knowing can lead to fear. For many women, “genital” is like that.

Not just genitals. The body of a woman tends to be impressed by other people and society with the sense of “the way it should be”. When I heard that Mr. Hayashi said, “I need to love my body by self-pleasure,” it is only when I can do it that it is natural for me to be different in every body, and I’m confident that there is no reason for others to say anything at all. I felt that I could say it with. It is an idea that you want to learn before connecting with other people.

I’m a fan of the American reality show “RuPaul’s Dragrace” on Netflix, but RuPaul, the charismatic drag queen in the show, asks the performers as follows. “If you can’t love yourself, how in the hell you gonna love somebody else?」……It was the story of Moribayashi-san who remembers such a thing.

Born in 1979. 21 years of experience as an AV actor. Over 10,000 appearances. 10,000 experienced people. Six years ago, we started activities to disseminate sexual violence and risks based on many sexual experiences. I'm working with an obstetrician and gynecologist to make videos and texts on sexuality education, and I'm doing a series of articles that answer sexual consultations on women's sites (Women's SPA! In addition, we are energetically developing events and lecture activities to find out the essence of sexuality by touching and make it familiar. My hobbies are reading and puzzles.

Miura conducts interviews and writing activities on the theme of female sex and life, and may be "every woman needs lesbian sex", including the series "A really pleasant sex taught by a female doctor" series. She was in charge of editorial cooperation such as "How long can I give birth? who thinks to be an egg professional and frozen storage-". Author of "Sexpedia-Heisei Women's Sexual Encyclopedia-" (Bungei Shunju).